My little bean is rapidly becoming not so little anymore. I mean people always say they grow up so fast but geez, I never realized how fast it really goes! 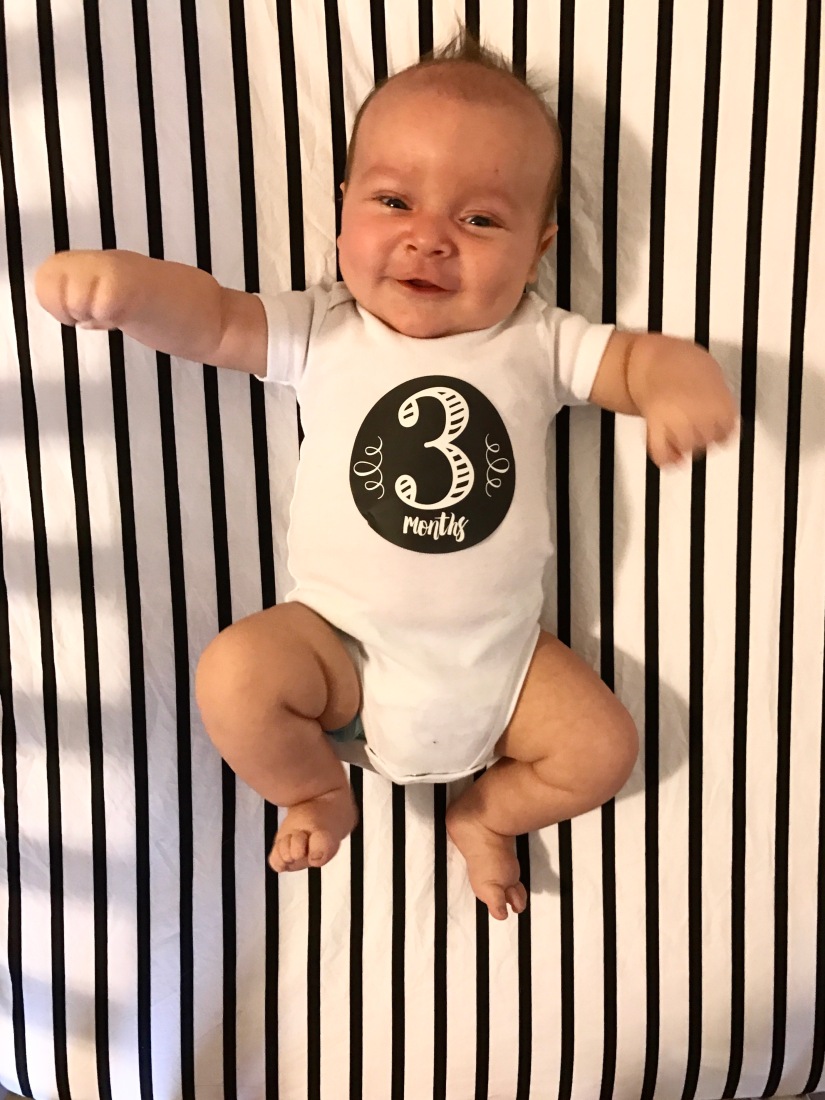 No check up for Waylen this month so I’m not sure of his exact weight. I would estimate it is around 15 lbs. though. He is still my chunky monkey ha.

As of now Waylen is pretty much a little man. He currently can hold a plank longer than me (during tummy time) and really uses his forearms to lift himself up. Plus he officially rolled over at 10 weeks and now also does this weird inch worm scooting while on tummy time. He has started grabbing at his toys and currently loves to shake Chappy’s musical egg and his giraffe rattle. He smiles and laughs and I SWEAR has already said his first word. Ha okay so I’m kind of kidding, kind of serious. They always say when babies speak their first word (usually Dada) they aren’t actually talking yet, just still putting sounds together that happen to come out as dada. Well Waylen did that a few weeks back, but instead of dada he said wow. And when I said he said wow, I mean he sounded like an adult saying wow. It was weird. So yeah basically my baby is a genius who started talking at 9 weeks. (Kidding)

Now let me just say, sleep regression is reallll. My easy going baby became not quite as easy betweeen 9-10 weeks and my interval sleeping quickly turned into not sleeping at all. As the expert mommy I am (ha yeah right) I’ve concluded that our sleepless nights were caused by a combo of reflux, gas, and good old fashion cluster feeding due to a growth spurt. There were nights he’d eat for 20, I’d sit him up for 20 (to help with reflux,) he’d sleep for 20, and then we’d start all over. I can’t just blame the baby though for my zero sleep, it takes me WAY to long to actually fall asleep. Chappy will seriously hit the pillow and be out, unfortunately for me it takes closer to 30 or so minutes sooo if it wasn’t for that I would’ve at least slept a little. Some nights though he would wake up around 4-5 and only want to sleep someone’s arms. Is anyone else’s baby like that?! He would be fast asleep in my arms but as soon as I set him down he’d be wide awake screaming… and of course as soon as I picked him up he’d be out again. Sometimes being a mom is just like really awesome right?! ha. That’s when I’d wake Chappy up and make him take the bean. He was waking up at 5 to work anyways so I didn’t feel too bad.

Luckily that little phase didn’t last too long and before we even hit 11 weeks he was back to sleeping 4+ hours at night and now will go up to 7 on a good night! Apparently “wonder weeks” are to blame and right after his irritable phase he did roll over so I guess they’re really a thing.

Some of Waylen’s favorite things these days are bath time, tummy time with Ramone, air druming with daddy, looking in mirrors and out windows, kisses from mom, being carried in his Ergo or Boba, and when anyone sings (mom) or raps (dad) to him. He doesn’t have too many dislikes, basically just riding in his car seat in Chappy’s car. That is literally the only time he will scream with no end ha. My car though, he loves! Yay me!

In the end being a mom is still awesome even though I have become a little too dependent on coffee and donuts. Here are some adorable pictures of my tiny human from the last month. Enjoy! 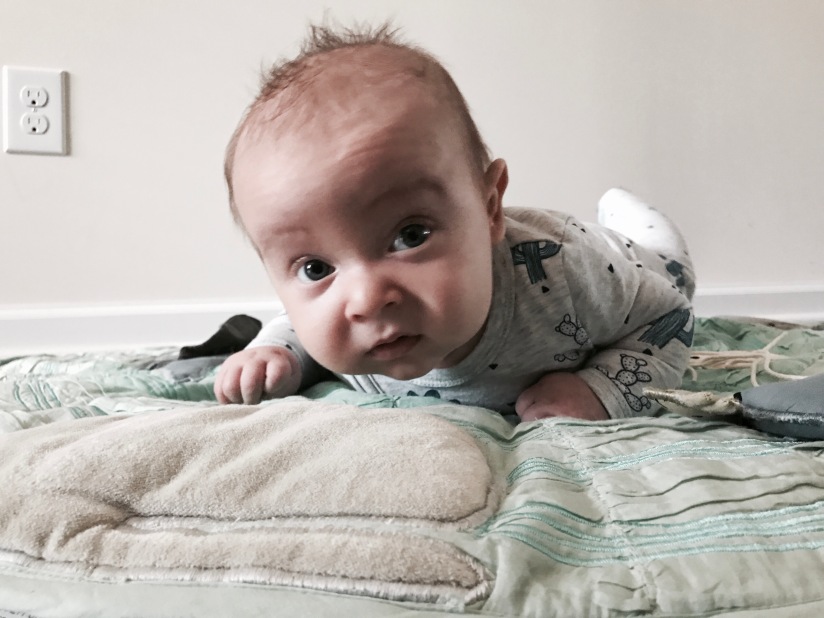 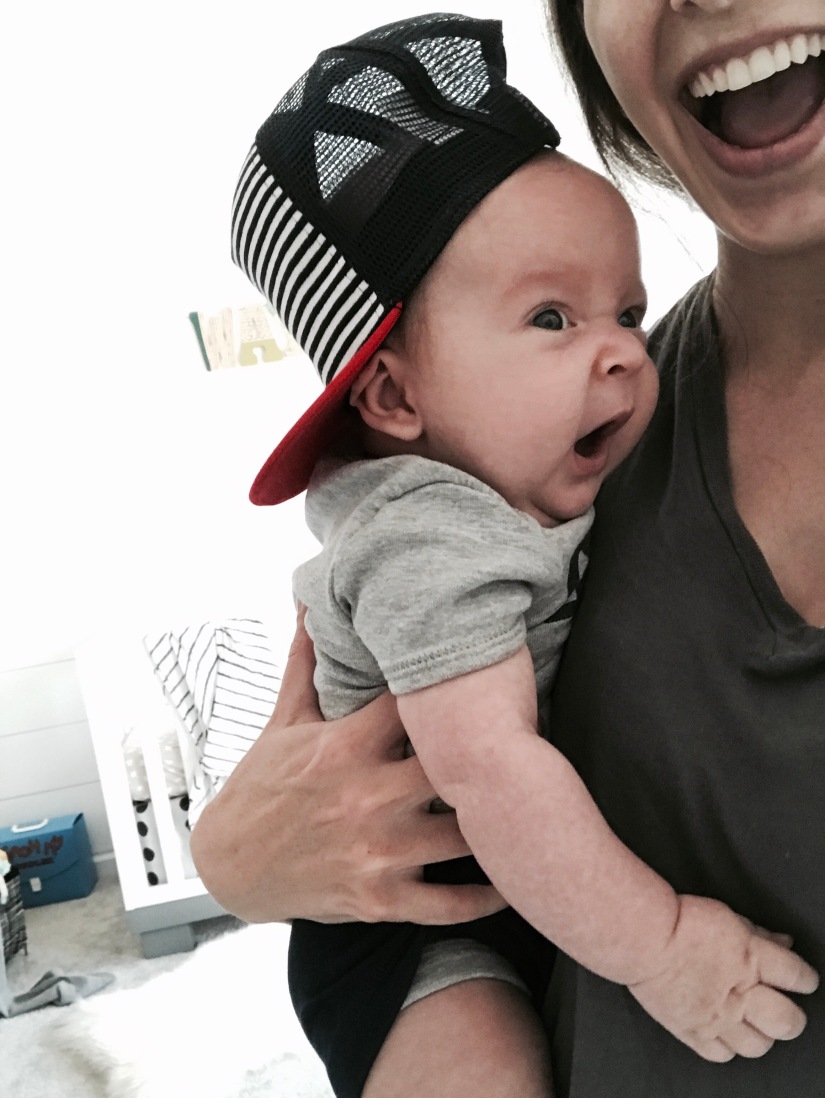 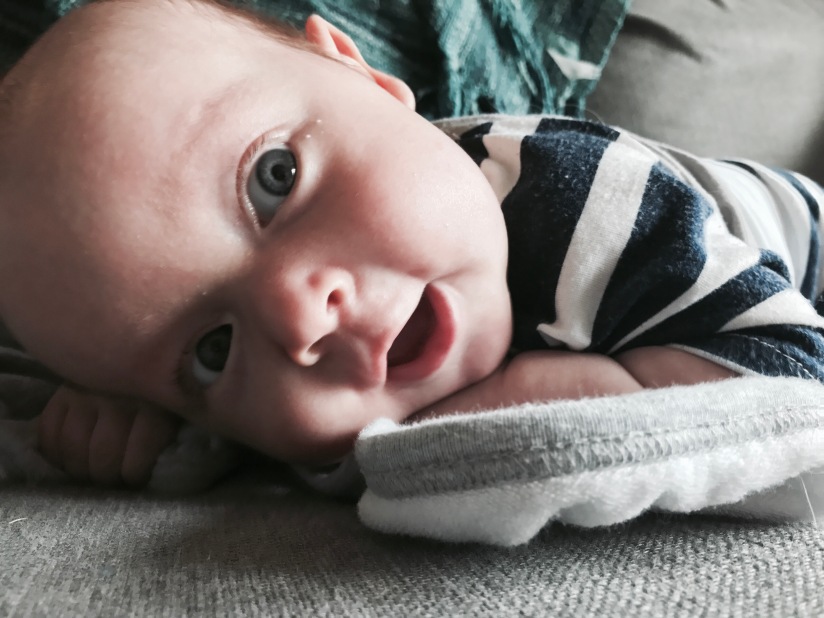