6 months in and I am exhausted already. I’m beginning to lose hope that I will ever get that “glow” ha. But seriously, as excited as I am to be pregnant and have this little baby I am definitely not one of those women who loves to be pregnant. I’ve pretty much been sick and/or uncomfortable the entire 6 months which has really been exhausting. I’m short and have a short torso so basically I think there is just no room for this little bebe to go! I can’t eat large meals anymore and have to stick to a million tiny snacks throughout the day and I STILL get extremely uncomfortable even after just eating those. I never thought I’d say this but food is no longer my friend ha. Other symptoms I’ve been feeling – back aches, sore hips at night, round ligament pain, getting out of breath easier, oh and I swear my hair hasn’t grown at all in the last 6 months which is superrr weird for me. On the plus side though I think I could probably go a week+ without shaving my legs and no one would even notice. Haha. Also this little bean is really starting to move a bunch which is fun to experience!

I have finally started to really pack on the pounds and now have officially gained 8.6 lbs since losing 3 in the first trimester! As long as I use my belly band I am still able to fit into all my pre-pregnancy work pants which is nice but my favorite go-to outfits are either overalls or a t-shirt dress. I’ve been trying to keep up with exercising but ugh IT IS HARD. I can’t wait until it cools off a bit more so I don’t have to wake up as early to exercise outdoors. Right now I pretty much stick to 30 minute conditioning sessions, long morning hikes, and just recently started prenatal yoga!

Here are some of my weekly pictures over the last month.. 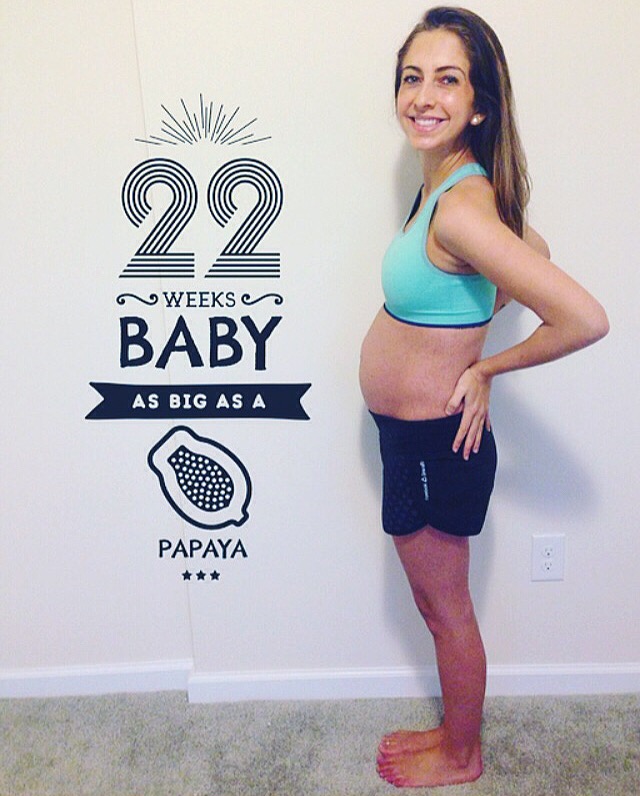 Only a few more weeks until we reveal the gender!